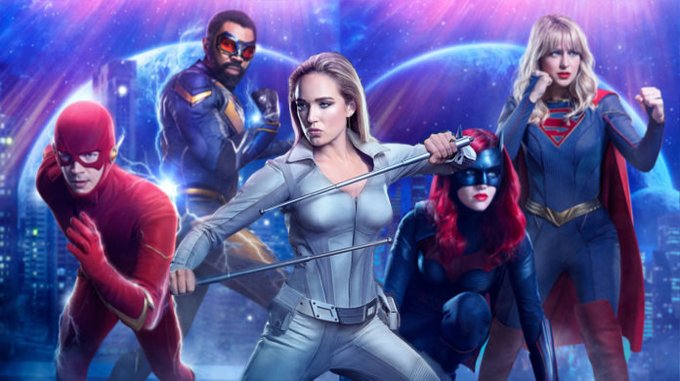 This is more than one week old but I feel as it should be covered.

Since 2012 with the premiere of ‘Arrow’, The CW has been home of a couple of DC series that followed as a result of the mention series’ success and fans quickly named the DCTV universe ‘Arrowverse’.

More than seven years later, five other shows air on the network:
‘The Flash’ is the second longest- running, after ‘Arrow’, is on its sixth season and is greenlit for at least one more.

DC’s ‘Legends of Tomorrow’ and ‘Supergirl’ will be getting a sixth season as well. ‘Black Lightning’ has had its first cross-over event tied to the rest of the Arrowverse with ‘Crisis on Infinite Earths’ and will return for a fourth season.

The newest addition to the line-up is ‘Batwoman’, a show that also shows lot of potential and will also return for at least a second season.

‘Arrow’ has two episodes left ’til its series finale. It’s not cancelled, it’s ending and there’s a spin-off series planned.

After the Ninth Circle delivers a major setback for Team Arrow, Diggle reluctantly reaches out to a Four-Star General of the Defense Intelligence Agency for help, despite unresolved tension from their past. Meanwhile, Oliver discovers a piece of information that he believes will turn Emiko against the Ninth Circle. Alena returns with an interesting proposal for Felicity.

Synopsis:
“Oliver and Felicity are disappointed after they learn that William is hiding something from them. Wanting to focus on his family, Oliver steps back from his Green Arrow duties and let’s the team take over tracking down a serial killer. However, when the team becomes targets for the killer, things take a bloody turn.”

Airs Monday, February 11 on The CW.

Synopsis:
As a camera crew follows Oliver and team around to talk about their past as vigilantes and what the Green Arrow means to Star City, Oliver must also deal with William’s return from boarding school as well as a new threat to the city.

OLIVER RETURNS TO HIS REGULAR LIFE IN STAR CITY — Oliver (Stephen Amell) is ready to get back to work with the SCPD and to focus on his marriage with Felicity (Emily Bett Rickards). However, when Dinah (Juliana Harkavy) tasks Oliver with tracking the new Green Arrow (Sea Shimooka) things take a surprising turn. Meanwhile, Diggle (David Ramsey) and Lyla (guest star Audrey Marie Anderson) must answer to ARGUS about Diaz (Kirk Acevedo). Andi Armaganian directed the episode written by Benjamin Raab & Deric A. Hughes (#710). Original airdate 1/21/2019.

Crisis on Infinite Earths will premiere on The CW in the Fall of 2019.

Monday January 21st on The CW.

Arrow returns with all-new episodes January 21st on The CW

Supergirl returns with all-new episodes January 20th on The CW.

Go behind the scenes with the Arrowverse production team and actress Ruby Rose as they give you a look at Batwoman’s introduction to the DCTV universe.

Arrow returns for a seventh season on October 15.

Arrow is new Thursdays at 9/8c on The CW, and available next day on The CW App.

Titled “All for Nothing,” the episode is set Thursday, February 1 and is officially described as follows:

“liver (Stephen Amell) continues his battle with Cayden James (guest star Michael Emerson). Dinah (Juliana Harkavy) and Oliver have a major disagreement that endangers the life of one of their own.”