Netflix has revealed that all three seasons of ‘Avatar: The Last Airbender’ arrives on their service in May, 15th, at least in the US.

Water. Earth. Fire. Air. All three seasons of Avatar: The Last Airbender are coming to Netflix in the US on May 15th. pic.twitter.com/RCKylFYknA

The series aired between 2005 to 2008 with 66 episodes and such a captivating finale that many claim it’s one of the best ever.

Synopsis:
The world is divided into four elemental nations: The Northern and Southern Water Tribes, the Earth Kingdom, the Fire Nation, and the Air Nomads. The Avatar upholds the balance between the nations, but everything changed when the Fire Nation invaded. Only the Avatar, master of all four elements, can stop them. But when the world needs him most, he vanishes. A hundred years later Katara and Sokka discover the new Avatar, an airbender named Aang. Together they must help Aang master the elements and save the world.

It was also revealed back in 2018 that a live-action remake based on the original series AND with the original creators involved is in works, also for Netflix.

The following concept pictures for ‘Avatar 2’ were shown by James Cameron yesterday in Los Angeles at the ongoing CES 2020- event.

Avatar 2 has just wraped up production and is set for a December 17th 2021 release.

There is however more to come, as there are plans for three more films in the franchise slated to premiere in theaters 2023, 2025 and 2027. Holidays openings is a qualified guess.

James Cameron is known for pushing the tech- boundaries. Latest that happened was Avatar, the mpovie that made 3D technology mainstream. He wants to continue on that path and revealed to Society of Motion Picture and Television Engineers that he’s pushing for glasses-free 3D.

“I’m going to push.,” said Cameron, who was accepting an honorary membership to the Society. “Not only for better tools, workflow, high dynamic range and high frame rates — the things we are working toward. I’m still very bullish on 3D, but we need brighter projection, and ultimately I think it can happen — with no glasses. We’ll get there.”

Cameron went on to tell THR that he’s working on “HDR, 4K for native stereo reduction, all the plethora of things we can do with CG that we couldn’t do or were so difficult. I’m going to need a lot of water [simulations], dynamics sims. And merging water, air, fire, all that sort of stuff together into complex simulations is going to be essential for the Avatar films.”

There are four Avatar sequels announced and the first one is on a slate for a 2018 release. Given the fact that it was pushed back a couple of times, I wouldn’t be surprised if the release date will change once more. Still, I want to revisit Pandora.

“At the 20th Century Fox panel at CinemaCon 2016, director James Cameron took the stage, and as he has at other events for the past several years, started talking about Avatar.

The director announced there will now be four sequels in the Avatar franchise, instead of the previously announced three.

“The stuff that’s been developed is really far beyond the first film,” Cameron said of the work they’ve been doing to prep for Avatar 2, 3, 4, and 5.

The new release dates for the films are still planned for Christmas-time releases, now for 2018, 2020, 2022, and 2023. The films will each standalone, but also connect in the larger world.” 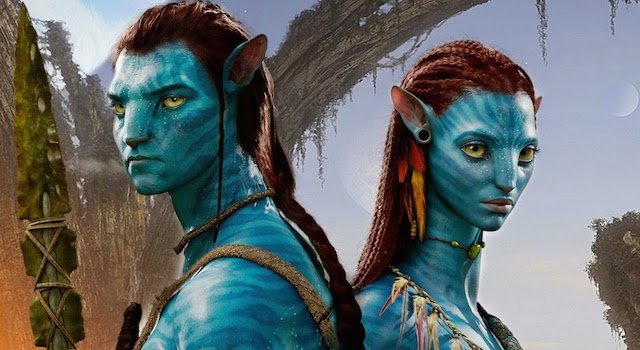 Me geekin’ by vloggin and rockin’ the shirt while I talk about both Star Wars: Episode VIII and Avatar 2

“Christmas of ’17 is the target,” Cameron confirmed of the expected release of Avatar 2. “At least, that’s what we’ve announced. But I don’t consider that to be as important as the fact that when we get all three films done, we drop them a year apart. I call it a meta-narrative that runs across the three movies. Each film stands alone, but it also tells one much larger story. We have design more or less finished, which is an enormous task. It’s been about a two-year task. (We’ve finished) all the creatures and the landscapes, and the new worlds within the world of Pandora that you see. The writing is ongoing, but almost finished. Technical development is done. Stages are done. Infrastructure. So we’re really poised to start after the first of the year.

One of the announcements at New York Comic Con I consider to be the biggest is that Dark Horse is going to make a series based on Pandora – the planet on which the 2009 movie takes place.

This move might seem a bit unexpected but have in mind that FOX has in the past given the rights to Dark Horse to produce series based on ALIENS and PREDATOR.

The series will explore the past and the future of the Na’vi, the race of the movie and according to the source, it has the blessings of director David Cameron.

You can also read that Avatar 2 is expected to hit theaters Christmas 2017.