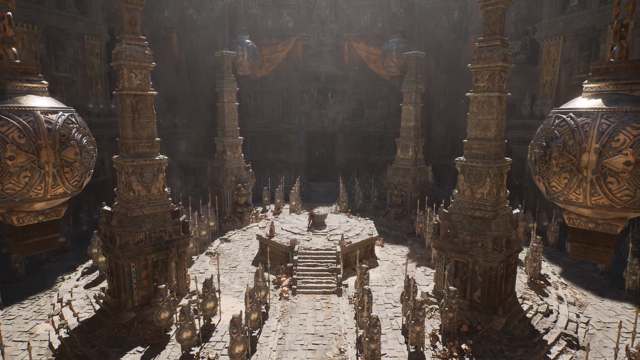 Unreal Engine 5 was revealed two days ago with a real-time demo running live on PS5 and it’s just as jaw-dropping as you would dream of. Well, beyond that actually.

This is the future and I’m really excited about this guys. It might take a couple of years ’til we get there but we’re in for a threat!

Epic states that the goals for “this next generation is to achieve photorealism on par with movie CG and real life, and put it within practical reach of development teams of all sizes through highly productive tools and content libraries.”

This and more info about the new technology used to achieve this can be found on their blog:
https://www.unrealengine.com/en-US/blog/a-first-look-at-unreal-engine-5

Sony’s Playstation 4, has sold 20,2 million units as of March 1st, making it the fastest- selling videogame console ever, the company told on Wednesday.

The PS4 was launched in November 2013 and reached the 20 million milestone in less than a year and a half. As a comparition, it took a year and seven months to sell that many units for the PS2, which is the most sold console of all- time.

The swedish game retailer Webhallen has listed Fallout in the category of upcoming PS4 games.
The release date as for now is listed to 2015.

Promising mech shooter Titanfall is one of Xbox One’s flagship titles, but EA is considering future titles in the series for launch as fully multiplatform releases.

Speaking in an investor call last night (transcribed by Seeking Alpha), EA exec Blake J. Jorgensen explained that the publisher already had its eyes on a multiplatform future.

Xbox One Countdown to Launch will air on Spike TV as well as streaming on Xbox Live, Xbox.com, Spike’s website, GameTrailers and the GameTrailers app.

The show will kick off at 11.00PM ET/8:00 OM OT on November 21. The stream will show the New York and Los Angeles launch celebrations, interviews with developers, gameplay and some live performances.

With the PS4 launched and the Xbox One around the corner, EA wishes to grab your attention with the brand new FIFA 14 ad for next-gen.

Battlefield 4 suffers from several problems as we are writting.
The PC version of the game is being attacked by DDoS which is used to try and inerupt servers by overloading the traffic. This led to the PC version being unplayable online for the majority of the weekend.

The PS4 version of the game is also affected by crashes and instability, with the game mode Conquest being one of the worst things affected.

DICE have been posting on Battlelog Forums telling people what was wrong and that they are addressing those problems ASAP.

PS4 have arrived in North America. The Xbox One is launching on 22nd November. Welcome to the 8th generation of home-gaming consoles.

With PS4 launched and already sold in over 1 million units, the Xbox One will try to achieve the same perfomance. The winner in this console war will be the one with best games in our opinion, at Keep Geekin.

The Xbox One live streams will start as of today at Gamespots and IGN‘s, where users can check out the games, the UI and other stuff they might have questions about. Xbox One will be a bit pricier than the PS4 but it will have Kinect included in the package.

The PS4 have been rapported to may suffer from the blue light of dead, which means that no video signal is to be outputted, we hope that it won’t be the case with the Xbox One, as some might remember some of the Xbox 360 launch issues.

It seems that Sony has pushed in this generation for exclusive content, something that Microsoft were able to do under the last one with 60 minutes of exclusive gameplay in Assasin’s Creed: Black Flag, the Destiny beta hitting the PS4 and PS3 first and some exclusive features in the Diablo 3 expansion: Reaper of Souls only hitting the PS4. Xbox One on the other side has Titanfall as Xbox and PC exclusive.

According to various sources, the PS4 has sold in over 1 million units in the first 24 hours of it’s launch. The numbers does not count the numbers of units shipped to the stores across the North America, but the numbers are actual the units sold to consumers.

Remember that the numbers are for North America as the PS4 has launched over there only, for now. The prediction foretell that Sony is going to push 3 millions units by the end of 2013.

A while ago, EA and Respawn Entertainment confirmed a relase date for Titanfall.

It was then when we got to know that a Collector’s Edition of the game will be realsed.

The Collector’s Edition includes an 18-inch high robot statue with lights. Now we get to see how it looks in a new trailer.

Titanfall releases on March, 13rd to Xbox One, Xbox 360 and Windows.