I’ve got HYPED last year when critics and audience praised this movie. IMDb describes it as:

I like FANTASY most, yet SCI-FI follows it close. With the film being Swedish AND an “ALIEN SCI-FI”(described as such by some other sites), which is HIGHLY UNUSUAL for Swedish movies. We’re mostly fed with criminal dramas/thrillers but this project was made to be appealing for an audience like me.

I’ve heard that the creative minds behind the project have been contacted by HOLLYWOOD folks. There may be something in the works, but nothing OFFICIAL as of now. I wish them good luck and I’ll let ya’ll know my toughts about the movie when I’ll get it. ‘Till then folks, here comes a trailer… Enjoy!

One of my favorite artists just dropped a new joint, his last for this year.

The series will premiere February 1, 2019 on Viaplay and is described as urban-fantasy.

Artist Adrijana‘s contributions to this year’s Melodifesrtivalen is Amare. Melodifestivalen is a big Swedish competition which lets the audience, in the end, choose a winner that will represent Sweden at Eurovision Song Contest ( that will be held in Kiev, Ukraine in May).

The competition is parted into 4 semifinals and a “second chance”- part before the big final.

Amare has made it to Sweden’s Top 50 on Spotify, charting at 49 as for now, with over 70K listenings in just a couple of days. 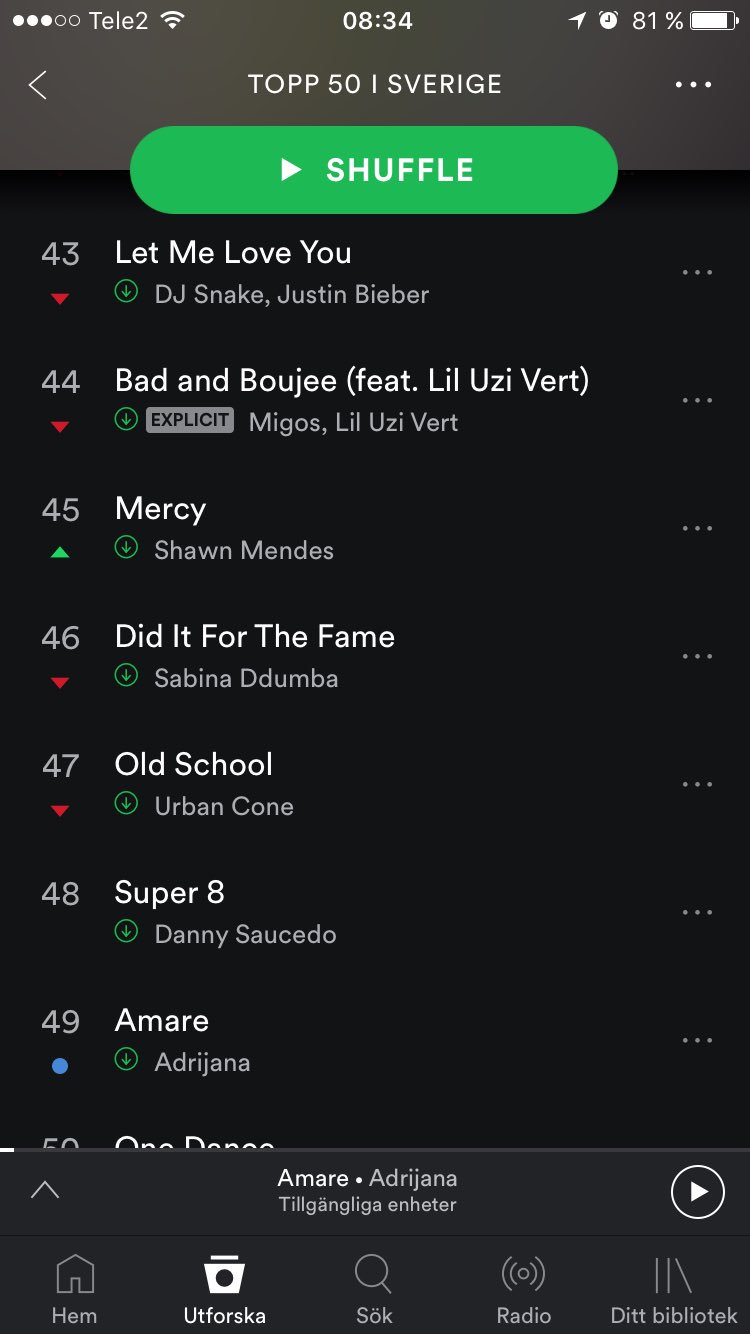 Adrijana‘s manager has made a name for herself by interviewing various artists and other personalities for her blogg – duvetinte.se and even for Kingsizemagazine, Scandinavia’s biggest hip hop magazine, is streaming games on Twitch, is a DJ and has a Youtube channel. She even got a Facebook page.
Her twitter is Duvetinte

Make sure you check them out!

Captain Sweden‘s creator: Jörgen Berthage
Geekeenboy meets the creator of Swedish superhero Captain Sweden. Read the interview with its creator and find out what inspires him, who ‘The Captain‘ is and what we could expect from both Jörgen and his creation. We wrote an article in which we presented the character to our readers, so you could read that aswell.

Well, basically It came from the lack of Swedish or European Superheroes. We all know the American ones but if I ask you to name a Italian Superhero its not that easy.The swedish superheroes thats been  created here is mostly  parodys or joke orientated. I want to create  something else. A real supehero story set in a Scandinavian enviroment .First I came up with a concept of a Nordic superhero group but as the idea developed I decided to make him a much more independent  character. Now he is a Urban city lonewolf character protecting  Gothenburg.

2. Can you describe the superhero’s background?
Captain Sweden is actually a normal guy. No flasy superpowers. The story is about two brothers, Jonas and Tony Mendez who grow up in Gothenburg, Swedens’ second largest city. Tony Mendez is a Skatepro nicknamed “Captain Sweden”. One day when the two brothers return to a skatepark they discover a gang beating up another guy. Tony, who is the older brother, interferes and gets stabbed by the gangleader. Later Tony dies from his injuries. Jonas grows up alone with his mother who goes into a deep depression and gets hospitalized. Jonas decides to become a masked protector for the city . He takes the name of Captain Sweden as a secret honour to his late brother. The costume embodies the name.


3. What or which are you inspirational source/sources?
I grew up in the 80s so back then swedish kids could read Superman, Spiderman ,Tarzan they all had their own comics. Of course the Phantom was very popular here aswell and still is for many. On TV i watched Gi.Joe, Bravestarr all these cartoons and there even was a superhero teddybear called Superted  wich I loved when i was like 6 years old. Later on I was a huge Todd Mcfarlane fan and I remember when i got my hands on Spawn #1 in a comicbook shop in Gotheburg. I was so impressed with the artwork,those colours in the Image books where mindblowing. So I guess as an artist you take alot of inspiration from your childhood popculture and mix it with all the comics and cool movies you ever seen. As far as Comicbook artist goes, I looked up to John Byrne, Neal Adams, Todd Mcfarlane, Liefeld, all the Image guys was a huge influence. Nowdays I would say Tony S Daniel but I still follow Todds projects and the Image founders, Its nice to see those guys are still around 20 + years later. But I have gotten  better at finding my own style in later years, After alll  you dont want to be a copycat.To be original, to be a pioneer. Thats my ambition. To create something unique and entertain people.

4. Do you see, or should we see, any similarities with comic book characters such as ‘CAPTAIN AMERICA’ and ‘DEADPOOL’?
With Captain America, the obvious inspiration is in the name “Captain+Country” and the concept of creating a superhero costume that has elements of a flag in it, but thats basically it. Captain Sweden took that name to honour his dead brother who was known as “Captain Sweden” to the Skatecommunity. Therefore he is not a patrionic character in that sense.For Captain Sweden  Its a nickname not a military rank.

Captain America is a soldier, Captain Sweden is a civilan. Captain Sweden has no superpowers and is not controlled by the goverment or any organisation.He has more in common with, for example Batman than Captain America. Ive been asked about Deadpool before and I guess they mean the fully covered facemask but for me, my refrence was Spider-mans mask and the way swedish soccerfans paint their faces with the yellow cross and blue facepaint going to soccergames. I read alot of Liefelds Youngblood stuff in the 90´s but I wasnt aware of Deadpool until recent years when he became popular.  Again with the superpowers, his healingpower and the fact that Deadpool kills his enemies I dont see many similarities between them as characters.

5. When can we read about ‘CAPTAIN SWEDEN’s adventures?
Early on I made a misstake an announced a Graphic Novel date that I couldnt hold so I wont do that again. Ive make everything myself from pencil artwork, inks, colouring and lettering so Its taken me a long time. Right now, I have a 10-pages coloured  comicbook story finished and I would love to submit that to Swedish  publisher. If that doesnt happen Im gonna go for selfpublishing maybe as a Kickstarter project.

In that case it will be a 22 page comic with 10 comicbook pages and the rest will be fact files on characters, artgallery, Maps and stuff like that. I used to love reading about secret lairs or like the Gi.Joe Fact files cards and Marvels Superhero files. Hopefully Captain Sweden fans will enjoy that aswell. It will be in Swedish first but I also want to make an english version that will probably be published online.There is some interesting projects  happening in small print companies here so an alternative is to publish my 10 pages in an Anthology comic so Im looking into that aswell. I will announce a specif publication date once its all decided. On captain swedens facebook page and twitter. My goal is still to make a Grapic Novel but this short story will be published first to satisfy my very patient Captain sweden Fanboys and Fangirls.

6. What more adventures are there to come to ‘CAPTAIN SWEDEN’?
Well only the future will tell for sure but Im getting new ideas all the time. Iwe written an short synopis fo a Christmas story that also is an origin story for one of Captain Swedens enemies.  A superhero is only as good as his villians so Im trying to come up with really great villains. To me, Batman has the best villains in Comics. The Joker, the riddler I mean, amazing characters. In the Captain Sweden Universe the characters dont really have superpowers but some have magical powers and things like Time or dimension portals is possible.The occult and supernatural events.  So for instance there might be an elseworld story where Captain Sweden finds himself in ancient  times.. The first story will be a origin intro and then cuts to  many years later when he acts as Captain Sweden.

The 18 years old international Swedish superstar Zara Larsson have performed earlier today on the high prestige show Live Lounge on the Brittish  BBC RADIO 1 and man, did she delievered!

Check out her performance below and enjoy, dudes!

These are some impressive numbers, specially for Swedish hiphop.

As usual there is no evidence without a pic or link so here you got one pic from Mabou’s instagram.

He is about to release a second mixtape – SFDB. Stay tunned as I’ll keep you updated when it releases.